Hear The Word Of The Lord

"I will stand upon my watch, and set me upon the tower, and will watch to see what He will say unto me, and what I shall answer when I am reproved.

For the vision is yet for an appointed time, but at the end, it shall speak, and not lie: though it tarry, wait for it; because it will surely come, it will not tarry. Habakkuk 2:1-3 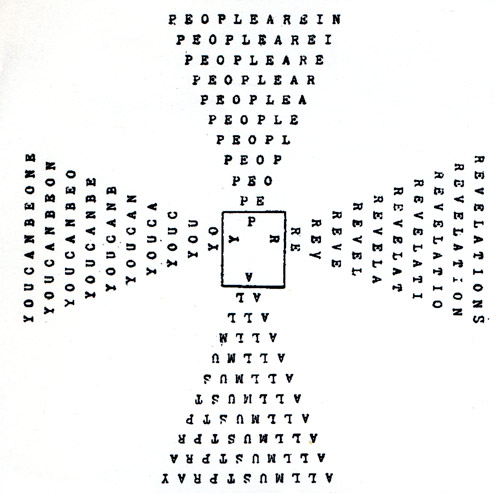 A message in a cross trumpeted to the four corners of the earth from God's heart.

After entering the apartment at the North Palm Beach Yacht Club he was walking to the back bedroom where he intended to go to sleep, but while passing the T.V., which was on, he heard a man say, "How would you like to know that all of your sins could be forgiven and that you could have eternal life with Jesus Christ. His first thought was, Wow, that sounds great. There was a number being displayed at the bottom of the screen. He called the number and was welcomed by a TBN prayer partner. This young lady assured him that it was really true, that if he would ask for forgiveness and accept Jesus Christ into his heart that Jesus would change his life. He prayed with the prayer partner and accepted Jesus Christ as his personal Lord and Saviour.

It was that night that the Lord appeared to him at the foot of the bed. He was lifted up and His feet were not touching the floor. There were white clouds that surrounded Him. He wore a beautiful robe and His arms were stretched out as if He was calling Brother Greg to Himself. Brother Greg says he couldn't really focus on anything except His eyes. The Lord didn't speak and Brother Greg couldn't speak, but it was as if the Lord was looking right through him.

On arising the next morning, Brother Greg took a piece of paper and began typing this unusual cross that seemed to just flow out of his spirit. Why he formed these words into this cross, he does not know. The only explanation he has is that it was by the inspiration of the Holy Spirit. "In a dream, in a vision of the night, when deep sleep falleth upon men, in slumberings upon the bed; Then He openeth the ears of men, and sealeth their instruction," Job 33:15-16

It wasn't until the third day that Brother Greg saw the message that was within the cross: "All you people revel." Looking up the word revel in the dictionary, Brother Greg learned it meant "merry going" and as Webster states: "wasting the lamps of night."

Being born again for only three days, Brother Greg had no idea what that was supposed to mean, but after coming into contact with a Christian woman who was very knowledgeable of the Word of God, he was told about the parable in Matthew 25:1-13 in which the kingdom of God is likened to ten virgins that took their lamps and went forth to meet the Bridegroom. In the parable five of the virgins were foolish and wasted the oil in their lamps.

Some of the obvious and most important messages are laid out, however, there are other messages to be found to those that study.

In the message "All you people revel" God is saying that this nation, The United States of America, as well as many people in all nations, are wasting the lamps of night being caught up with the cares of this life. They have turned this earth into a large playpen heaping pleasures upon their own lusts.

Many have a form of godliness but have denied the Lord of glory. They draw nigh to the Lord with their lips, but in their hearts, they have turned back into Egypt desiring all that the world can afford.

God wants to have a dialog with His highest creation, humanity. He has created mankind as a free moral agent and will not force His will on anyone, but He says, "Come now, and let us reason together, saith the Lord: though your sins be as scarlet, they shall be as white as snow; though they be red like crimson, they shall be as wool. If ye be willing and obedient, ye shall eat the good of the land." Isaiah 1:18

"For I know the thoughts that I think toward you, saith the Lord, thoughts of peace, and not of evil, to give you an expected end." Jeremiah 29:11

God is merciful and long-suffering, but there is an appointed time that He will judge the world in righteousness and for this cause God is saying...

"And that knowing the time, that now it is high time to awake out of sleep: for now is our salvation nearer than when we believed. The night is far spent. The day is at hand; let us, therefore, cast off the works of darkness, and let us put on the armour of light. Let us walk honestly as in the day, not in rioting and drunkenness, not in chambering and wantonness, not in strife and envying, but put ye on the Lord Jesus Christ and make no provisions for the flesh, to fulfill the lust thereof."

Draw nigh to God and God will draw nigh to you. Humble yourself in the sight of the Lord and He shall lift you up. Pray that you may be accounted worthy to escape all the things that are soon to come to pass. Pray for the peace of Jerusalem and behold. I come quickly, and my reward is with me to give to every man according as his works shall be, saith the Lord!" Romans 13:11-14

To enlarge the crosses simply click on the image.

This cross was purchased at Wilson's Jewelry store in Lake Park, Florida. It is interesting to note that the store had been broken into and robbed just several weeks earlier, but the cross according to Mr. Wilson was in the large vault which they were not able to get into.

Brother Stevenson went to the Jewelry store because he sensed that perhaps now that he had become a believer that maybe he was supposed to wear a cross. While brother Stevenson was looking at some standard type crosses inside the glass counter, in sort of a bent over position to get a good look, Mr. Wilson who was standing on the other side of the counter said, "Is this what you are looking for?". When brother Stevenson looked up, Mr. Wilson was holding this Grecian cross which brother Stevenson never saw him take out of the case.

Brother Stevenson realized that it looked very similar to the cross that he had produced through the inspiration of the Holy Spirit two weeks earlier, but knew for sure Mr. Wilson could have had no knowledge of the cross with the messages.

When brother Stevenson asked Mr. Wilson where he found such an unusual cross, Mr. Wilson explained that he had seen it in a museum and was quite interested in the piece. Being a well-known Jewelry maker in Palm Beach County, he asked the museum if he could make a copy of the cross, they granted him permission and the cross was made.

Brother Stevenson realized that this was not just a coincidence, but was the hand of God and nothing short of divine intervention.

Try to imagine the excitement in brother Stevenson's heart when he realized that God was giving him something to do and he was only a baby Christian. He didn't know how to pray, He couldn't quote one scripture, he certainly couldn't preach and yet here is the Redeemer of mankind appearing to him in a vision, giving him a message and providing him with a powerful confirmation.

Now, almost thirty-five years after the vision of the Lord and the revelation of the Grecian cross, it's messages and it's prophetic significance, many will say, why such a delay?

Well, it certainly is not out of step with the Word of God. God will always move in the fullness of His time.

The Lord wants us to know the greatness of His power and His ability to work out his great purpose in the fullness of His time. He wants to fulfill His promise in the face of what seems as impossible obstacles to their fulfillment.

If God has made a promise, nothing in heaven or on earth can impede His purpose. The Bible is replete with examples of this principle. We can look at Abraham's promise and the years that past before the promised seed was realized and then the great test that made him the father of faith. We can look at the life of Joseph who was a type and figure of Christ. Joseph had a dream that his brethren would bow down to him, but it was many years before that would take place. He was nearly killed, was sold into slavery, imprisoned and forgotten about for many years. There was Moses who was being proved for forty years on the backside of the desert before he was commissioned to deliver the Israelite out of the bondage of Egypt.

"And here is the mind which hath wisdom. the seven heads are seven mountains, on which the woman sitteth. And there are seven kings: five are fallen, and one is, and the other is not yet come; and when he cometh, he must continue a short space. And the beast that was, and is not, even he is the eighth, and is of the seven, and goeth into perdition." Revelation 17:9-11

Pray For The Peace of Jerusalem

We have 99 guests and no members online